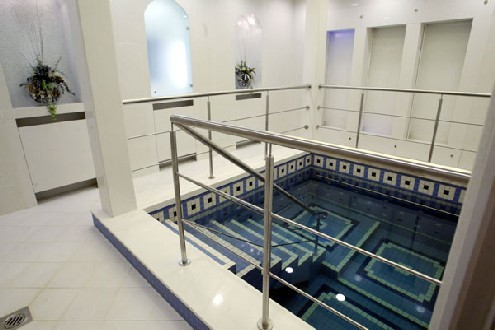 One of the cornerstones of Jewish family life is the tarhat hámispáchá, that is, ritual purity. The complex rules and conditions for the construction of the ritual bath, the mikveh, are detailed in the Talmud Mikvaot treatise. The water used for ritual purification must be living water of natural origin, so stagnant water like a lake is not suitable for the formation of mikveh, but a river is. The Kazinczy Street mikveh is fed both by the rainwater collected at the top of the building and by the spring water from the borehole in the yard.

It is customary for women from the wedding after the seven clean days following the monthly cleansing, for men in the morning and before the holidays. It is also a requirement to immerse newly purchased kitchen utensils before use.

The plot was purchased by the Autonomous Orthodox Jewish Community of Budapest in 1923 with the aim of building a modern ritual bathhouse. Several plans were made for the implementation of the mikveh, until finally, in 1928, the community chose an Art Deco style path, which plan is most harmonized with the facade of the nearby central Orthodox synagogue. The ritual bath, which is connected to the residential house, started its operation in 1930 with a separate women’s and men’s section, as well as a vessel immersion room. The women’s section underwent a complete renovation in 2004, making it one of the most fastidious ritual baths in the world.

This website uses cookies to improve your experience while you navigate through the website. Out of these, the cookies that are categorized as necessary are stored on your browser as they are essential for the working of basic functionalities of the website. We also use third-party cookies that help us analyze and understand how you use this website. These cookies will be stored in your browser only with your consent. You also have the option to opt-out of these cookies. But opting out of some of these cookies may affect your browsing experience.
Necessary Always Enabled
Necessary cookies are absolutely essential for the website to function properly. These cookies ensure basic functionalities and security features of the website, anonymously.
Functional
Functional cookies help to perform certain functionalities like sharing the content of the website on social media platforms, collect feedbacks, and other third-party features.
Performance
Performance cookies are used to understand and analyze the key performance indexes of the website which helps in delivering a better user experience for the visitors.
Analytics
Analytical cookies are used to understand how visitors interact with the website. These cookies help provide information on metrics the number of visitors, bounce rate, traffic source, etc.
Advertisement
Advertisement cookies are used to provide visitors with relevant ads and marketing campaigns. These cookies track visitors across websites and collect information to provide customized ads.
Others
Other uncategorized cookies are those that are being analyzed and have not been classified into a category as yet.
SAVE & ACCEPT